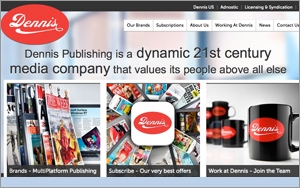 Qubit announced that Dennis Publishing has selected the company to drive subscription optimization.

Judith Kempton, head of digital marketing at Dennis Publishing, stated these insights will enable Dennis to deliver “a stronger customer experience that is tailored to each visitor’s wants and needs.”

Kempton added that Dennis Publishing wanted a system where the company could do most of the work in-house, but also could be offered additional support where needed.

Following the death last summer of the group’s founder, Felix Dennis, the company has been undertaking ambitious launches, such as the multimillion-pound investment in a free, weekly health and fitness magazine called Coach and the launch of technology Web site Alphr in June.

Dennis Publishing also launched its 34th international edition of Health & Fitness magazine in Turkey, under license, in May.

While the free magazine market may be a growing part of the publishing industry, the partnership with Qubit suggests Dennis Publishing is looking to increase subscriptions following a string of new brand launches.

“Dennis Publishing recognizes the relevance of customer experience to driving conversions and its potential to impact on magazine subscriptions,” stated Graham Cooke, founder and CEO of Qubit.