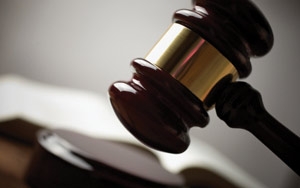 Yelp shareholders can't proceed with a lawsuit accusing the company of duping investors by misleading them about whether reviews on the site are authentic, a federal judge has ruled.

The decision, issued last week by U.S. District Court Judge Jon Tigar in the Northern District of California, marks the latest in a string of courtroom victories for Yelp, which has long faced questions about its reviews.

Tigar said in his ruling that Yelp didn't make "materially false" statements about the authenticity of reviews on the site.

The shareholders' suit dates to April of 2014, shortly after the Federal Trade Commission said it had received more than 2,000 complaints about Yelp. Some of those complaints accused Yelp of attempting to “extort” ad buys from small businesses by manipulating customer reviews.

Yelp's stock dropped from around $80 a share at the beginning of April 2014 to around $66 a share on April 4 -- shortly after the FTC's public statements. Since then, the stock has declined even further. As of Monday morning, Yelp was trading at around $30 a share.

The FTC closed its investigation in January without bringing a complaint, Yelp said earlier this year. The company has always denied allegations that it manipulates reviews.

The shareholders alleged in their lawsuit that Yelp falsely touted its reviews as genuine in public statements. One example cited in the complaint occurred in October of 2013, when the company stated: "We saw another quarter of strong momentum thanks to the high-quality, authentic content contributed by Yelpers around the world."

Shareholders alleged that boast was misleading, arguing that Yelp's site allegedly "included a substantial amount of false reviews by reviewers who did not have first-hand experience with the businesses."

Tigar said that Yelp's statements "were not false or misleading because a reasonable investor would not believe that all reviews hosted on Yelp’s website were authentic."

He added that Yelp, which attempts to filter out fake reviews, had already admitted that some reviews were phony.

"Defendants both explicitly and implicitly acknowledged that some Yelp reviews were inauthentic," Tigar wrote. "Those acknowledgements, along with a common-sense understanding of what it means for a website to host user-generated content, demonstrates that no reasonable investor could have understood defendants’ statements to mean that all Yelp reviews were authentic."

Tigar also rejected shareholders' allegations that Yelp falsely denied it "manipulated" reviews by giving advertisers preferential treatment. Tigar said there was no proof that Yelp's statements on the matter were false.

The shareholders pointed to complaints to the FTC alleging that Yelp manipulated reviews. But Tigar said those complaints weren't substantiated. "A dozen relevant but unsubstantiated and divergent consumer complaints over at least five years does not establish a pattern of conduct sufficient to indicate that defendants’ statements were false," he wrote.

A Yelp spokesperson said the company has always said the lawsuit was meritless. "Yelp has repeatedly stated that it does not manipulate reviews in favor of advertisers or against non-advertisers, and the court saw through plaintiffs' attempts to cast these statements as false," the spokesperson said.

Last year, the 9th Circuit Court of Appeals ruled in favor of Yelp in a lawsuit brought by business owners who alleged the company “extorted” them by manipulating reviews.

The business owners in that case alleged that Yelp promised to bury bad reviews, and promote good ones, in exchange for ad buys. The 9th Circuit ruled that those allegations don't amount to "extortion."

The judges said that Yelp is entitled to "post and arrange actual user reviews on its Web site as it sees fit."

They added: “As Yelp has the right to charge for legitimate advertising services, the threat of economic harm that Yelp leveraged is, at most, hard bargaining."