Just In Time For The Holidays, NBC Opens 'Superstore' Sitcom 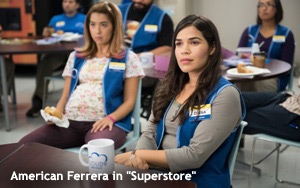 It seems fitting that a comedy series based in a Walmart-type, big-box store would make its debut at the outset of the Christmas shopping season.

It’s a clever bit of scheduling, moving up the premiere of this series to this week. Maybe NBC hoped to draw big-box retail advertisers to a show that is about a fictional store just like them.

Unfortunately, the store in “Superstore” -- a chain called Cloud 9 -- is not decked out for the holiday season, which would have made this scheduling plan even more effective. However, on this show’s other aspects, the news is mostly good.

“Superstore” is a one-camera comedy about the workers in a typical “everything under one roof” retail store. That is basically the concept. And to a great degree, the show gets the details right.

Among other things, customers’ children are often seen running rampant and unsupervised -- including stuffing themselves with candy, using the potties and other mischief. Some of the adult customers are no better, such as one who casually takes a roll of toilet paper from the middle of a stack and then simply lets the rest of them cascade to the floor, leaving one of the store employees to clean it up.

Well, as one of my relatives likes to say, “You’re workin’ retail!” And this is the kind of thing retail workers have to put up with apparently.

While she was made up to look unattractive on “Ugly Betty,” Ferrera is not ugly. And in “Superstore,” she’s reasonably attractive enough to draw the attention of Jonah, so the two spar and flirt. It’s a predictable sitcom plot development, and it gets under way a bit too quickly for my taste. But in the hands of these two, it feels relatively unrushed.

In Episode One, we get to know the other characters as well -- a simple-minded teen girl named Cheyenne who is six months pregnant and her shiftless boyfriend who dreams unrealistically of becoming a white rap star, another assistant manager who lives and dies by the chain’s manual of employee conduct, an African-American store employee in a wheelchair, a gay Asian employee who works 10 times harder than everyone else, and the store’s manager who is a bible-toting conservative.

In fact, the store manager figures into a conversation about Planned Parenthood and abortion in tonight’s second episode of “Superstore” that is ill-timed, coming so soon after the fatal shootings at a Planned Parenthood clinic in Colorado.

“I couldn’t get a ride to Planned Parenthood,” Cheyenne tells her fellow employees in the break room when she tries to explain why she didn’t use contraceptives when having sex with her boyfriend. Jonah then replies that he would be happy to drive her there next time.

So the store manager says, “I would prefer if you didn’t offer to shuttle our employees to the abortion clinic!” An argument then ensues about the appropriateness of a workplace debate on the subject of abortion. Ordinarily, this particular scene would merely be tasteless and unfunny. In the context of recent events, however, it sticks out like a sore, inappropriate thumb.

In addition, the main plot point of the second episode involves a mannequin who looks just like Jonah. It’s a storyline that nearly everyone on the planet will remember from “Seinfeld,” when a store mannequin looked just like Elaine. For this reason, someone on the production and/or writing staff of “Superstore” should have pointed this out and rejected the idea. Perhaps the people who work on this show are all too young to have memorized every episode of “Seinfeld,” as so many others have. Time flies, doesn’t it?

The best aspects of “Superstore” are the two leads, especially America Ferrera. As a TV actress, she is as charismatic as they come.