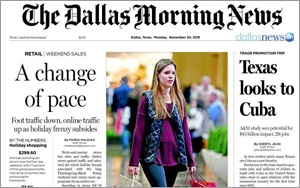 If at first you fail, pry, pry again.

Following two previous attempts that ended in quiet retreats, The Dallas Morning News is preparing a third effort to pry some cash from readers with digital subscriptions accompanied by an online paywall, according to publisher Jim Moroney III, who revealed the plans in an interview with NetNewsCheck over the weekend.

In the interview, Moroney admitted the earlier efforts failed due to management errors, recalling: “We tried twice to do paid subscribers online, and we haven’t been successful. That’s our fault in execution, not because it’s not a good source of revenue.”

Moroney said the decision to revisit digital subs was prompted, in part, by a wish to anticipate the rise of online ad blockers -- which have yet to seriously affect the newspaper’s bottom line but will probably make their presence known soon.

However, the DMN publisher also conceded that digital advertising and subscription revenues alone won’t be enough to make up for the continuing decline in print advertising revenues.

On that note, he pointed to the acquisition strategy supported by DMN parent company A.H. Belo in recent years, which has sought to diversify the newspaper’s business by tapping new revenue streams in areas like marketing services.

Back in 2012, The Dallas Morning News partnered with Slingshot LLC to launch a social content marketing company, Speakeasy, to conceive and execute social campaigns and promotions for local and national brands.