Jay's In The Driver's Seat As Letterman Grows 'Darwin' Beard 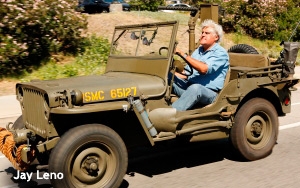 Jay Leno just got a promotion -- a second-season order for his CNBC show “Jay Leno’s Garage.”

The renewal was announced Thursday morning, just hours after the final show of the first season aired Wednesday night on CNBC. It expands the weekly, one-hour show from eight episodes in its first season to 12 in the second. The new season will begin next spring.

Earlier this week, on Monday, David Letterman took the stage at his alma mater -- Ball State University in Muncie, Indiana -- to “moderate a conversation” (the phrasing used in a New York Timesstory) between two film directors, Spike Jonze and Bennett Miller.

In photos from the event, you can see Letterman, 68, wearing a dark suit, striped tie, light brown loafers and white socks -- the wardrobe we were accustomed to seeing him in on his CBS “Late Show.” He’s added a bushy white beard, though, which makes him look like 19th-century naturalist Charles Darwin. That’s Letterman’s observation, not mine. He compared his beard to Darwin’s at the event, as a large photo of Darwin was displayed on a screen behind him.

Letterman also announced that he’s donating all of his personal show business memorabilia -- including Emmy statuettes and even pieces of his “Late Show” set (the ones that apparently escaped destruction on the morning after his final show last May) -- to Ball State, which plans to mount an exhibition of them called “The David Letterman Experience.” With these donations, it really does seem like Letterman is intent on putting his show business career behind him as he settles into retirement.

Not so with Leno, 65, who continues to work as if his life depends upon it. Earlier this year, he told me in a phone interview that he’s rarely ever 72 hours away from another stand-up gig. And his dedication to growing “Jay Leno’s Garage” in its second season indicates he’s not nearly done with TV yet.

In addition to being a showcase of extremely valuable classic and collector cars (many of them owned by Leno himself), the most illuminating portions of the show are the ones that deal with innovations in technology. In this way, Leno -- the archetypal “tell joke, get check” comedian -- has reinvented himself as a journalist on the automotive technology beat.

On Wednesday night’s episode of “Jay Leno’s Garage” -- subtitled “The Cars of Tomorrow” -- he profiled a manufacturer of custom cars who is developing an assembly scenario based primarily on 3-D printing technology. He and Leno took one of the cars out for a test drive, with Jay at the wheel.

Midway through their road trip through a nondescript L.A. neighborhood, this electric car suddenly conked out. Not one to conceal the truth, Jay matter-of-factly announced that they weren’t stopping intentionally, but that the car had run out of juice. “Truth be told, this was not a voluntary stop -- we ran out of electricity,” Jay reported. "We didn’t charge it up fully so we just kind of stopped."

“But,” he said, “we have another environmentally friendly option that I think will work very well. Guys?” With that, four men appeared at the rear of the car to begin pushing it back to the shop.

For its part, CNBC couldn’t be more pleased with the Leno show. The NBC-owned business-news channel says the first season of “Jay Leno’s Garage” was “the most-watched freshman season in network history,” earning it an enthusiastic renewal.

As Leno has often said, one of his philosophies throughout his career was to always make money for his employers. While that is easier said than done in many environments, Leno has always succeeded at this -- enriching NBC and the various venues (such as casinos) in which he performs and, in turn, enriching himself.

In this way, Leno is like the Hyman Roth of show business -- a man “who always makes money for his partners,” in the words of Johnny Ola in “The Godfather, Part 2.”

It has been two years now since Leno relinquished “The Tonight Show” and six months since Letterman retired after 33 years in late-night television, and they both continue to fascinate -- so much so that even though they’re now far removed from the late-night scene, some people just can’t stop writing about them.