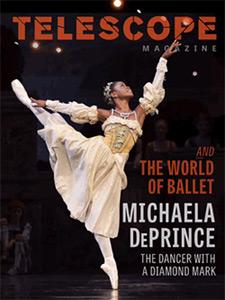 Santa Monica-based communications agency SGL Mediacast launched the first issue of its new digital magazine Tuesday. Telescope is designed for tablets and to be read in portrait-mode, keeping a print magazine feel.

Telescope is the first project the agency has created and the first time, SGL Mediacast has marketed their own content, Becca Bennett, the magazine’s editor and the agency’s communications director, told TNM.

The magazine will focus on one inspiring story for each issue, as well as articles and additional content, such as animations, video and audio, that revolve around the featured person. Bennett calls this their “unique twist on traditional storytelling.”

“We want to show our readers a new perspective of the world through the lens of the featured person,” she said.

For example, the first issue features 20-year-old, Sierra Leonean-American ballet dancer Michaela DePrince, who grew up as an orphan in Sierra Leone before she was adopted by Elaine and Charles DePrince, a couple from New Jersey.

She is the only dancer of African origin in the Dutch National Ballet.

Various articles discuss DePrince’s life, as well as the civil war in Sierra Leone and features on ballet. The app also has a nifty animation of a ballerina in a snow globe, which the reader can shake to activate falling snow and music.

Bennett told Publishers Daily that the ad plan for Telescope’s launch “will be mostly directed toward digital media buys via social media and Google ads.”

The first issue doesn’t include official ads. Instead, Telescope features a page of “friends for this issue,” listing companies or organizations that gave in-kind or co-promotional support.

Bennett said for the next issue, they may look into having one major sponsor befitting the next person Telescope features.

“At this point, we plan to keep the magazine feeling very ad-free,” she said, in order to emphasize the content and the digital experience.

“With the magazine, we want to create an immersive storytelling experience. Readers can connect with a story in a more intimate way than what print allows by using the multimedia potential of an app-based platform,” Bennett said.

The app and its digital magazine were built using the Mag+ digital publishing platform. SGL Mediacast also has its own design team, which created original animations and illustrations for the stories.

The app is available in both the Apple App Store and Google Play. Telescope will publish quarterly, with the next issue due April 15.
apps, digital, mobile, online publishing, sponsorship
Next story loading