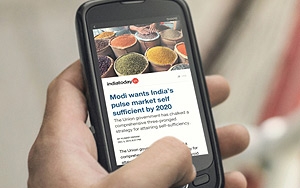 Facebook's Instant Articles is rolling out to Android users this week. The expansion follows the mobile service’s iOS launch, in May.

The news-perusing service is a win for Facebook’s nearly 900 million daily active mobile users. For them, it means easier access to more news sources, as well as faster load times for everything from text to video.

“We’ve been beta testing Instant Articles for Android with a small group of people on Facebook for several weeks,” Michael Reckhow, product manager at Facebook, in a new blog post.

Yet many of those publishers are reportedly not thrilled with the ad dollars coming from their participation in Instant Articles.

All told, about 350 publications around the world have joined the Instant Articles program. Presently, more than 100 are already publishing daily, by Facebook’s estimation.

Separately, Google seems to be gaining traction with “Accelerated Mobile Pages,” and now plans to launch service by early next year. Like Instant Articles, Google’s service promises publishers faster delivery of their content over mobile devices.

Unlike Facebook’s offering -- and Apple News -- AMP is designed to work across multiple platforms, is open-sourced, and available to any publisher that wants to participate. Of course, Google is also promising partner publishers more prominent display in its search results.

Publishers and developers are proving receptive.

So far, 4,500 developers have started following the project on Google’s Github repository, while 250 contributions of code and documentation have come in, according to the search giant.