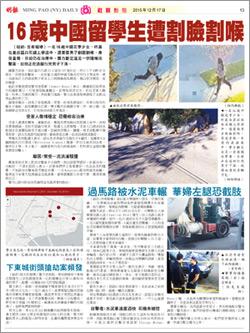 But Alibaba’s spokesman Rico Ngai spoke to Reuters on Thursday and denied the rumor, which was reported by the Australian Financial Review. When asked if talks had been held at any point over the last year, Ngai declined to comment.

A source originally told the Financial Review that discussions started in July. An initial meeting was reportedly arranged between Ming Pao and Alibaba to discuss a potential acquisition, in light of the newspaper’s deteriorating financial situation.

Many compared the acquisition to Bezos' purchase of TheWashington Post in 2013.

In a letter to Post readers, Alibaba’s chairman Joseph Tsai said the company would maintain the newspaper’s editorial independence.

“Some have suggested that ownership by Alibaba will compromise the SCMP's editorial independence. This criticism reflects a bias of its own, as if to say newspaper owners must espouse certain views, while those that hold opposing views are 'unfit,'" he said.

Alibaba has already moved to grow the Post’s digital presence. The company announced it will remove the paywall on its website to increase international readership and influence.

"Trust us," he told a Wall Street Journal reporter. "Why do people have to think that if we have it, it will lose its independence? Why not with others? We also read the newspapers. We also want media independence and fairness. What basis is there that with us, there will be no more independence?"
asia, china, newspapers, search
Next story loading