The U.S. advertising market continues on its torrid pace -- with both digital and TV advertising moving higher versus earlier levels in 2015 and against the same month in 2014.

Standard Media Index’s U.S. Ad Market Tracker index grew 23% in November versus the same period a year ago to an index of 259.5 -- a record since SMI began pooling results from the major media agency holding companies.

This growth is also 21% higher versus October’s index, which stood at 213. The tracker indexes the big agencies’ media spending volume at 100 in 2009.

SMI’s index research accounts for 80% of the media agency holding company advertising market -- every major player except for WPP Group. 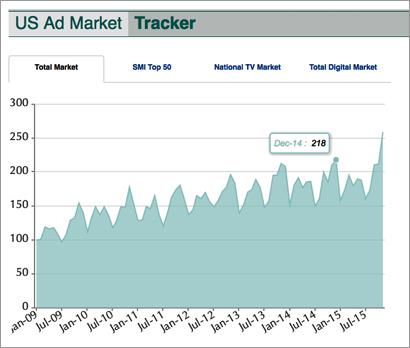