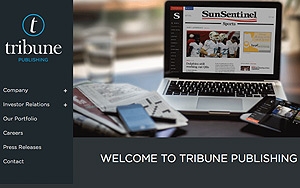 Mark Campbell will take on the role of Tribune Publishing’s senior vice president of digital acquisition and marketing as of January, the company announced today.

Campbell heads to Tribune Publishing from The New York Times Company, where he served as vice president of consumer marketing, during which he oversaw global digital subscriptions.

Campbell will report to Denise Warren, president of digital, who had also worked at The New York Times Company -- from 1988 to 2014. Her most recent position there was executive vice president of digital products and services, according to her LinkedIn account.

Another new addition to the Tribune digital team who had previously worked at the NYT is Rajiv Pant. He joined last month as chief product, technology and user experience officer.

At Tribune, Campbell will oversee digital acquisition efforts for the company, including consumer marketing and promotional strategy, product bundling and pricing strategy and cross-channel audience acquisition. He will also be responsible for driving overall digital consumer revenue.

In response to a troubling time for Tribune Publishing -- following a drop in company shares and the continuing decline in newspaper advertising revenue -- the company is ramping up its digital team with a series of strategic hires.

As Publishers Daily reported, last month the company snagged Pant as well as Mohit Pandey, who serves as senior vice president of engineering and mobile product.

Warren and Tribune Publishing will undertake several initiatives in the new year to mobilize digital subscription growth. They include switching to a metered model across all of the company’s properties in the first quarter of 2016, optimizing the print-digital bundle and improving content discoverability, the company stated.