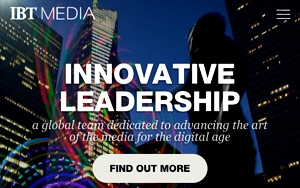 Noah told Publishers Daily her focus will be to customize IBT Media’s content for social consumption.

Noach told Publishers Daily she will focus on “bringing a data-driven approach” to social media interaction with IBT Media’s brands and try to get as many people as possible to engage with the content.

“We want to create experiences that are sustainable on social media, but also speak to the overarching brand experience,” Noach said.

IBT Media’s chief marketing officer Mitchell Caplan said the company’s social-media presence is “expanding rapidly” and Noach’s role will be to make sure to optimize this growth.

Noach will be based out of IBT Media’s New York City headquarters and will report to Caplan.

Noach was previously working at Doremus, where she was the Engagement Lead focusing on content, social media and influencer and experiential marketing.

It’s been an exciting year for IBT Media, with plenty of recent hires expanding the company’s team.

Caplan himself joined IBT Media just this July. In November, Marc Perton was appointed in the newly created role of editorial director, tech. Around the same time, Eric Gonon joined the company as vice president for video production and strategy and John Simons was given the role of enterprise editor.