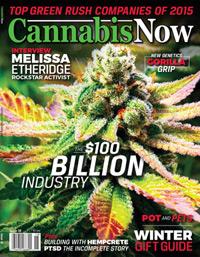 Please feel free to insert your own joke headline about getting high. This week Cannabis Now magazine announced that it will become the first marijuana-related publication to be sold on newsstands in airports across the U.S., through a national distribution agreement with Hudson News stores covering more than 50 major airports. The deal also includes distribution in Canadian airports.

The Hudson News deal adds to Cannabis Now’s existing footprint, including distribution agreements with Barnes and Noble, Books-A-Million, and Kroger as well as marijuana-related retail establishments around the country.

Concurrent with the airport distribution agreement, Cannabis Now also announced that it has initiated a new seed round of funding to enable further expansion.

Eugenio Garcia portrayed the airport distribution agreement as a sign of marijuana’s growing acceptance, in step with its legalization for recreational use in Colorado, Oregon, and Alaska, and for medicinal use in several dozen other states: “What we’re seeing is a paradigm shift. It is the final step in acknowledging that cannabis has become acceptable to the mainstream community.”

The spread of legal marijuana has sparked a surge in marijuana-related media over the last year or so. In August, the publishers of The Tasting Panel and The SOMM Journal launched The Clever Root, a new quarterly magazine about the world of “growables,” including cannabis, and in September rapper and famed cannabis connoisseur Snoop Dogg announced his attention to launch an online media company called “Merry Jane.”

In addition, a number of cannabis industry trade publications have launched, including Marijuana Business Media, CannaBusiness Media and the CannaBusiness Leader Newsletter. And there has also been some consolidation: in October PotGuide.com acquired KindReviews from Shift Cannabis Co.

It hasn’t been all wine and roses, however: last week the United States Postal Service announced a sweeping ban on marijuana advertising in all 50 states, declaring any publication containing ads for pot to be “non-mailable” everywhere in the country. However, USPS employees can’t determine whether a particular item is non-mailable and remove it from the mail. Instead, they must send a warning to the entity who tried to mail it, whether a person or company, and then inform law enforcement about the item.