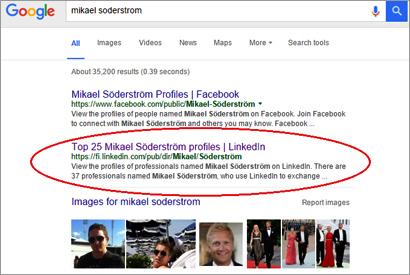 During the past year Google has been sending LinkedIn more organic search traffic compared with the same period last year, according to recent data. Search is at the core of LinkedIn’s traffic strategy, representing more than 22% of the site’s traffic share.

Search for someone's name in google.com and chances are that it will land at the top of the search results. In fact, Google accounts for 95% of the organic search traffic in 2015, according to SimilarWeb data.

Roy Hinkis, head of SEO at SimilarWeb, filtered branded search terms into a bucket to compare year-over-year search data for 2014 and 2015. The data shows that Google sent LinkedIn 27.53% more traffic between June and November 2015, compared with the same period in 2014.

An analysis of the top search terms driving traffic to the site reveals that people’s names top the list, excluding branded and misspelled queries for LinkedIn -- accounting for about 12.5% of search traffic, he writes in a post.

LinkedIn experienced the climb throughout 2015. Search accounted for the majority of the traffic from June to August, when desktop Web traffic to LinkedIn rose 9.26% -- up 16.15% compared with the same time period in 2014. The increase in direct traffic correlates to search traffic, while other sources remain relatively steady.