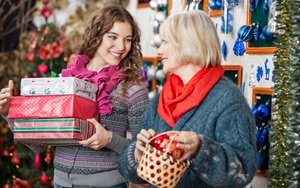 With a final burst of spending enthusiasm, it looks like American consumers may have given retailers happier holidays than they had expected. MasterCard SpendingPulse says sales climbed 7.9% this holiday selling season, with e-commerce sales rising 20%.

The index includes spending on cash, cards, and checks from Black Friday to Christmas Eve, and excludes auto and gas. It says e-commerce, furniture and women’s apparel sales grew in the double digits, while electronics and men’s clothing were disappointing.

“After a slow start, I’m very happy to see that the holiday season was hot for retailers,” says Sarah Quinlan, MasterCard’s SVP, market insights. “We saw some very promising trends. The double-digit growth in furniture sales, for instance, shows that consumers are willing and able to splurge on big-ticket items.”

Other observers, while also noting online strength, are still expecting that the drop in in-store traffic will constrain total holiday spending gains. With comScore reporting plenty of billion-dollar e-commerce days offsetting those potential brick-and-mortar declines, “our estimate of 3% - 4% sales growth appears to be on track,” writes Deborah Weinswig, executive director and head of global retail and technology for the Fung Business Intelligence Centre.

Fung’s research, conducted in the final days of the holiday selling season, indicates that online’s power this season was dramatic, with some 60% of its respondents saying they were doing most of their shopping online, and two in ten saying they’d use their mobile device for some purchases. It also confirmed the trend toward earlier shopping, with 48% of the survey saying they began before Black Friday. And 16% even said they planned to keep shopping after the holiday, indicating an even wider spread of the holiday season.

Amazon, meanwhile, was also crowing about a very happy holiday, and says over three million people joined Prime during the third week of December, “and over 200 million more items shipped for free with Prime this holiday season.”

It also says sales of its devices doubled from last year, and that “among Amazon devices, the all-new Fire tablet was the #1 best-selling, most-gifted and most-wished for product.”

Of course, like most Amazon press releases, this one was longer on congratulations than actual details, providing plenty of fodder for those fond of spoofing it.

“This might read to some like a glorious testament to unparalleled success,” writes Inc. columnist Chris Matyszczyk. “Or it might remind you of the glorious(ly delusional) pronouncements of Julius Caesar, Donald Trump, or Floyd Mayweather. Amazon declared that this, its 21st Yuletide, was, well, Yuge.”