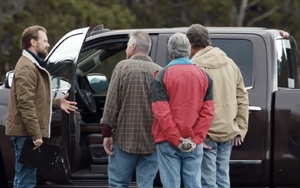 Chevrolet is talking connectivity via GM’s OnStar 4G LTE, with a new campaign breaking this weekend.

Although Chevrolet offers 4G LTE across all vehicles, the new work focuses on Silverado and is the latest in a series featuring truck owners learning that the best-in-class vehicle attributes they may have associated with Ford or Ram are actually Silverado’s. The new ad, part of Chevrolet’s “Real People, No Actors” campaign, shows how connectivity turns Silverado into a mobile office.

General Motors says it has sold more than 1.4 million vehicles with 4G LTE connectivity since June 2014, when it launched the service with AT&T across Chevrolet, Buick, Cadillac and GMC. The automaker says half a million of the vehicles it has sold with 4G LTE are Silverado, Silverado HD and Colorado trucks.

The Silverado campaign, via Chevrolet's global agency Commonwealth//McCann, comprises a TV spot in an unusual 45-second format, with a 15-second cut-down. There is also a long-form digital version plus two new Silverado videos on Chevrolet.com. The spot shows several guys invited by Chevrolet to compare the connectivity of the Silverado with that of a Ford F-150, whose “mobile office” is a tiny Airstream-type trailer with a manual typewriter, a satellite dish, WiFi modem and a secretary named Delores.

Said Paul Edwards, U.S. VP of Chevrolet marketing, in a statement: “Based on usage rates for features such as OnStar, 4G LTE, and RemoteLink, Chevrolet’s technologies deliver real-world benefits for our customers — and are a competitive advantage for our brand.”

Chevrolet says that this year owners have over 5 million interactions with the OnStar RemoteLink app every month, with Chevrolet Volt drivers most likely to use the app. Chevy also says that 100%, give or take, who bought a vehicle equipped with OnStar 4G LTE have signed up for a five-year subscription.

The automaker launched the "Real People" campaign last April when the company hit the road to give prizes and surprises in different cities, with celebrities handing out the wins, all streamed live on YouTube and at ChevroletBestDayEver.com.