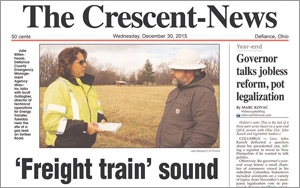 Although the sale of big regional and international dailies --  including the Financial Times, South China Morning Post, and Las Vegas Review-Journal-- has dominated headlines recently, as the year draws to a close dozens of smaller newspapers are also changing hands or going out of business much closer to home (if you happen to live in one of the affected communities). These deals represent big changes in the local media landscape, as small-town dailies and community weeklies come under the same pressures that disrupted their bigger peers.

Also this month, local publisher Schurz Communications sold four newspapers in Kentucky -- The Advocate-Messenger in Danville, The Winchester Sun, The Jessamine Journal and The Interior Journal in Stanford -- to Alabama-based Boone Newspapers, which formed a new company, Bluegrass Newsmedia, to manage the properties. Boone owns 70 local newspapers serving smaller communities across the South and Midwest, including The State Journal in Frankfort, Ky., acquired in October.

Colorado publisher Gazette Media expanded its local publishing footprint in the state with the purchase of the Cheyenne Edition and Woodmen Edition, both free community newspapers, earlier this month. And in Alaska two local newspapers, the Fairbanks Daily News-Miner and the Kodiak Daily Mirror, are becoming nonprofit operations after their acquisition by a nonprofit organization, the Helen E. Snedden Foundation. The foundation was created by the late wife of the former owner of the Fairbanks News-Miner, Charles Snedden, who published the newspaper from 1950 to 1992.

On a less positive note, some local newspaper publishers are also shuttering titles or going bankrupt. This month Trib Total Media, which publishes the Pittsburgh Tribune-Review, announced that it would close The Daily News of McKeesport, Pa. and The Valley Independent of Monessen, Pa., after failing to find a buyer for them. The newspapers will cease publication on Dec. 31, laying off a total of 87 employees.

Previously Trib Total Media sold eight other local newspapers as part of a restructuring that includes merging The Pittsburgh Tribune-Review with two other regional newspapers to form a new publication known simply at the Tribune-Review. The company laid off 153 staffers as part of the transition. Trib Total Media also announced that it is has taken a 40% stake in Newsmax Media, an online news publisher with a conservative editorial stance, through a new affiliate, 535 Media.

Also this month, Community Papers of Western New York, which publishes 21 free weekly newspapers serving rural markets as well as two publications for neighborhoods in Buffalo, N.Y,. filed for bankruptcy protection, although it said there are no plans to lay off any of its 200 employees. The publisher claims to reach 258,000 homes weekly with its free publications.