Farewell To 'Downton': We Will Never See The Likes Of This Again 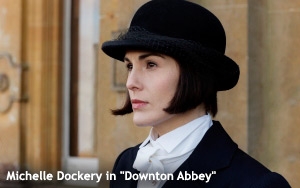 For five seasons, “Downton Abbey” has been one of the rarest things in the world -- a TV series that is damn near perfect. And here we are, sadly approaching the onset of the show’s sixth and final season, starting this Sunday night (Jan. 3) on PBS, a total of nine episodes.

Is “Downton Abbey” the best TV series ever made? I’m not one to apply the shallow, childish platitude “best show ever” to “Downton” or any other show, since it’s a phrase that many bloggers and so-called critics tend to hang on so many TV shows these days.

But having just watched a preview DVD of the first two episodes of the sixth and final season of “Downton Abbey,” I’m in a frame of mind to say yes -- at the moment I cannot think of a finer production that has ever been made for television, period.

It comes down to the elements of production, basically all of them -- acting, writing, cinematography, setting, set design, costumes, music, overall storytelling, you name it. This show is a wonder to behold -- beautiful to look at, sumptuous, seemingly accurate (in its period details about the lives of the residents and servants of a British manor house in the 1920s), and at all times, poignant.

In fact, that’s the word I would hang on “Downton Abbey” more than any other. Somehow, there’s an air of poignancy on this show that is unlike any other TV show I have ever experienced. And it’s especially true as the new season gets underway.

The year is 1925, and by the looks of things, showrunner Julian Fellowes and his team seem determined to craft an ending for everyone on the show. That will be no mean feat, since this show has so many characters whose stories are so intertwined. And yet you get the feeling even in these first two episodes that events are lining up in such a way that all of the characters’ fates will be accounted for by the time the series winds up in nine weeks.

If there’s an evident theme in the first two episodes of the season, it’s the theme of change -- although you could say that’s been the theme all along as the lordly Crawley family has faced the many challenges of maintaining their decidedly old-fashioned lifestyle in the more modern post-World War I period.

But as Season Six begins, the economics and politics of the era are encroaching even more on all the great manor houses. And the residents of Downton Abbey are finding the challenges to their survival to be greater than ever. It’s not a challenge to their very existence, of course, since they could always just downsize. Why live in a house with a hundred rooms if a house with 50 rooms will do just fine?

But it’s the way of life they have led for so long that is under threat. Their household supports the livelihoods of so many, and everyone is feeling the pinch, from the servants to the estate’s tenant farmers.

How the show’s various characters will adjust to the many changes they seem poised to undergo will likely become evident as the season proceeds. And when you watch the first episode this Sunday, you can make your own guesses and draw your own conclusions about what will likely happen to each of them.

While you’re doing that, you will get to enjoy the finest cast on TV today -- an ensemble of actors whose performances will be remembered for decades to come as among the best that television has ever offered. Who are the most outstanding? I could start a list here, but it would end up encompassing all of them.

Please note that I have revealed next to nothing here about what happens in the episodes I watched from the new season of “Downton Abbey.” Fans of the show deserve this approach because they prefer to discover its many joys on their own. If the first two episodes are indicative of what’s to come, the joys of this final season of “Downton Abbey” will be numerous indeed.

The sixth and final season of “Downton Abbey” on “Masterpiece” premieres Sunday (Jan. 3) at 9 p.m. Eastern on PBS.

tv
2 comments about "Farewell To 'Downton': We Will Never See The Likes Of This Again ".
Check to receive email when comments are posted.
Read more comments >
Next story loading