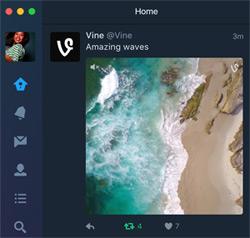 To start the New Year on a fresh note, Twitter on Wednesday relaunched its Mac app.

“We’ve built in some of the most-requested features so your Twitter for Mac experience combines what you love about Twitter with the elegance you expect on a Mac,” according to the social giant.

New features include inline video playback -- so videos will play directly in users’ feed -- GIF support, and group direct messaging. Along with an updated design, users can now select a “dark theme” that presents the world in black and white.

While standard practice for any consumer service, the changes have a greater significance for Twitter given its precarious position among users and advertisers. Twitter’s growth prospects have never looked less bright, the social giant revealed during its third-quarter earnings report on Tuesday.

During the third quarter, Twitter reported 320 million total average Monthly Active Users (MAUs), which represented a minor gain compared to the 316 million MAUs recorded during the previous quarter. Worse yet, Twitter said it expected fourth-quarter revenue to reach between $695 million and $710 million -- considerably lower than analysts’ estimates of nearly $740 million.

Additional features include a “mute” button to silence specific accounts, and a “Today Center” widget that includes highlights on users’ desktops.