'Forbes China' To Be Shuttered 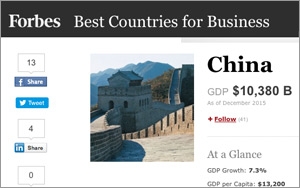 The launch of Forbes China in 2003 was an occasion for punditry and prognostication. It provided a piquant symbol of change as China’s economy exploded following its embrace of (some) capitalist and free market principles in the 1990s. Like McDonald’s near Red Square in Moscow, Forbes publishing a Chinese edition seemed to sum up a world in transition – but no longer.

Forbes China is set to close after the licensing agreement with its Chinese publisher expires this week, according to China Daily, which first reported the news. The deal between Forbes Media and Zhihui Culture Communication, its Chinese publisher, expires on Thursday and has not been renewed, effectively spelling the magazine’s demise.

China Daily speculates that the deal may have lapsed due to troubles at Zhihui’s parent company, 21st Century Media Co., and 21st Century stakeholder Fosun International, which has published Forbes China since 2009 after taking over from its previous publisher, Hong Kong Morningside Ventures.

21st Century Media ran into legal trouble when its former president was sentenced to four years in prison for threatening to smear companies in the magazine as part of a blackmail scheme.

Fosun, which owns a third of 21st Century Media, saw its chairman sequestered for four days earlier this month as part of an undisclosed legal investigation.

Despite a number of negotiations no new investor stepped forward to keep Forbes China alive, and the entire staff is being laid off.

The demise of Forbes China may be just as symbolic as its launch, coming as it does during a rocky period for the country’s economy. Still, there is no denying China has come a long way in the last decade.