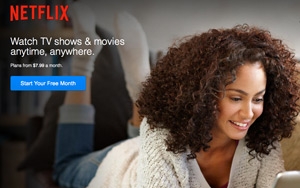 LAS VEGAS -- Already a major contributor to the current changes in the U.S. TV industry, now Netflix looks to make an even bigger move globally.

In his keynote speech here at the Consumer Electronics Show on Wednesday, chief executive officer/co-founder Reed Hastings says the subscription over-the-top TV service will triple the number of countries where it will be available -- adding 130 new territories, bringing its total to 190, a nearly global footprint.

New countries that can access Netflix include Vietnam, Poland, Russia and Saudi Arabia. Hastings noted that one big exception was China. Netflix continues to explore opens for that territory.

"Today, you are witnessing the birth of a new global Internet TV network," said Hastings, in prepared remarks. "With the help of the Internet, we are putting power in consumers' hands to watch whenever, wherever and on whatever device."

At the end of last year, Netflix was available in 60 countries. Netflix totaled 69.17 million subscribers worldwide, with 43.18 million of these coming from the U.S.

Building on its push into original programming, the company says in 2016, it plans to release 31 new and returning original series, 24 original feature films and documentaries, stand-up comedy specials and 30 original kids series.