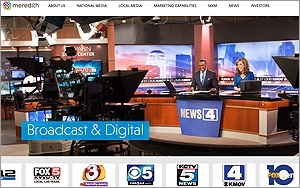 Meredith Corp. moved swiftly to salvage its merger deal with Media General. That follows the latter’s announcement of a rival deal with Nexstar Broadcasting Group, which is offering to buy Media General in a tie-up that would cancel its previous agreement to buy Meredith.

These moves have triggered a bidding war, but it’s unclear how or when these deals could proceed, since Media General must first gain Meredith’s consent to terminate their merger agreement.

The Media General-Nexstar alliance would create one of the largest local TV station operators in the country.

The proposed transaction would supersede Media General’s previous promise to buy Meredith for $2.4 billion, as part of a deal agreed upon last September.

Meredith Corp. responded with a higher offer, promising Media General shareholders $3.90 per share, as well as a full share in the merged entity, with a value of $18.84 per share, plus annual dividends set to pay out at $0.68 per share.

Previously, Meredith had only offered a share in the merged entity, with no additional payments. It also offered a bigger slice of the planned spectrum sale, with a cash payout of $4.29 per share for Media General shareholders.

Although the total value of Meredith’s offer is higher, there is less immediate cash on the table than the Media General proposal.

Alternatively, Meredith may agree to terminate its deal to be acquired by Media General, provided there’s suitable compensation -- likely meaning a substantial cash payment. Failing such an agreement, Media General shareholders would have to vote to annul the Meredith deal.

Meredith has emphasized that its proposed deal is much closer to fruition than the Nexstar deal, which still requires regulatory approval, meaning investors could have cash in hand sooner.

Whichever side prevails, one thing is certain: The deal revolves around profitable broadcast TV properties, which have been at the center of a string of merger and spinoff transactions in recent years, rather than other types of media.

Throughout the negotiations, Meredith’s national magazine business has mostly been sidelined in discussions of shareholder value, which have focused instead on its broadcast assets.