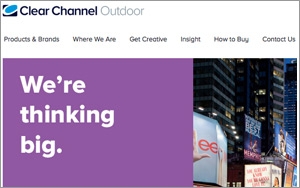 The deal will bring Lamar’s total sign holdings to around 320,000 displays across the U.S., Canada, and Puerto Rico, including around 2,000 digital displays, and is forecast to add around $79 million to the company’s total revenues this year.

Lamar CEO Sean Reilly said he hopes to achieve earnings of $44 million a year from these properties in the near future, the previous peak of Clear Channel’s earnings in the same markets.

Lamar funded the acquisition with $460 million in short and long-term loans. Clear Channel is said to be contemplating divesting billboard assets worth up to $400 million in other markets, with possible buyers including Total Outdoor and Reagan Outdoor.

This is the latest in a series of moves to consolidation in the U.S. outdoor advertising business.

Back in 2014, CBS Outdoor, now known as Outfront Media, acquired most of the outdoor advertising assets of Van Wagner Communications for $690 million, creating the country's second-largest outdoor advertising company in terms of billboard assets, after Clear Channel.

Also in 2014, Lamar made a number of acquisitions targeting regional outdoor advertising companies, including Marco Outdoor Advertising in New Orleans.

Overseas, CCO was considering the sale of its European assets for as much as $2.5 billion, but put the plan on hold, given the weakening euro. The company then separated its U.S. and international operations, fueling speculation it is planning to convert is domestic operations into a real estate investment trust.