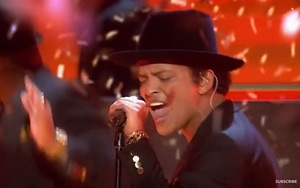 As much as the Grammy Awards are about celebrating the best recordings made over the past year, the ceremony itself is also a showcase for novel musical pairings and performances. And they’re a big reason why audiences tune in.

For the upcoming broadcast of the 58th Annual Grammy Awards, the Recording Academy is launching a new marketing campaign asking audiences to “Witness Greatness.”

“The awards show landscape gets awfully crowded,” Evan Greene, chief marketing officer of The Recording Academy, tells Marketing Daily. “And while we know we are delivering never-before-seen performances and our award is the penultimate in music, we need to make audiences aware of the telecast.”

The new effort from TBWA\Chiat\Day includes television, print, social and outdoor executions showcasing some of the industry’s biggest acts and performers (including Lady Gaga, Kendrick Lamar, Bruno Mars, Sam Smith, Carrie Underwood and The Weekend). One television commercial in the campaign follows a piece of confetti as it falls through the air. “They say success is about being in the right place at the right time,” says a voiceover. “And they’re right. But it takes years of struggle, countless hours of practice, and infinite seconds of not giving up.” As the action moves to real time, it’s revealed the confetti is falling on Bruno Mars during his 2013 Grammy performance. “When opportunity taps you on the shoulder,” continues the voiceover, “the world will witness greatness.”

“Music is a powerful tool,” Greene says. “This campaign puts a stake in the ground and invites us all to ‘Witness Greatness’ and be a part of the moments that define our culture and move us forward. We aim to engage music fans everywhere, to ignite a conversation about the power of music in their lives.”

A second commercial capitalizes on the confluence of the Grammy Awards and Super Bowl 50 appearing on the same network (CBS) within weeks of each other. The spot depicts spotlights coming on around a musical stage, as well as the floodlights coming on in a stadium, as performers and players get ready to take their respective stages.

“There is a clear connection to witnessing greatness on the football field and the Grammy stage,” Greene says. “There is a natural, undeniable intersection between music and sports. And this year, both SuperBowl 50 and the 58th Grammy Awards will both air on CBS, representing an extraordinary opportunity to build a bridge between the best in music and the best in sports.”

The television commercials will air exclusively on CBS, but they’ll also be distributed through social and online channels as well, Greene says. The Grammys air on CBS on Feb. 15.