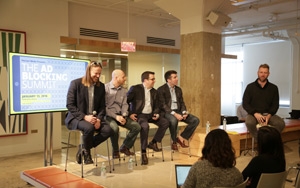 Ad blocking has become a major challenge to the advertising industry. the practice is spreading from desktop to mobile, costing marketers and publishers billions of dollars a year in revenues, and raising questions about who should pay for content.

The overall message emanating from the gathering was that the industry needs to be proactive in developing best practice solutions and recognizing consumers' legitimate desire to block ads versus planning to side-step ad blockers with technology on the publisher side. Many consumers have issues with digital display advertising and its effect on their data and privacy.

Much discussion focused on the publishing world looking vastly different in five years if ad blocking is not addressed. The speakers all agreed that there is no free lunch and less ads mean paywalls and reduced content. Panelists referenced that the cost of an ad-free experience for a single consumer is approximately $40-60 a month in lost ad revenues for publishers.

“This is one of the really delicate things about what the ad-blocker process has taught us about the ad-serving process: if you [only] listen to exactly what the consumer seems to ask for it’s going to fail. There would be no such thing as video advertising in pre-roll form; no data, no smart ads all which can bring great value to consumers," said Jed Hartman, CRO, Washington Post. “Yes, you have to make the ad experience much better for the consumer – but some payment in the form of their attention for a reasonable amount of time is key for the publishers, marketers and ultimately for consumers. So you have to find the right balance.”

Panelists discussed the creative strategy that the industry should take to deter consumer need for ad-blocking technologies.

“I’ve been working in digital marketing for about 15 years now, and one of the reasons why I was compelled to get into this pursuit is because you can match things like a user behavior with a more rich and immersive creative user experience,” said Williams. “But we’re also hearing ‘Hey, the user is just not really into that’ -- they want a lighter weight experience, something that isn’t as intrusive -- is there a happy medium?”

In response to Williams’ question Brendan Riordan-Butterworth, director of technical standards at the Interactive Advertising Bureau, replied, “Think about Super Bowl ads -- they’re are not the smallest, least intrusive ads out there… but people seek them out. You get millions of views when they’re posted. So I think there’s really the opportunity for marketers to bring their ‘Super Bowl game’ to some creatives and for that to become a situation where you're getting people looking at the ads just as much as the content."

Importantly, the experts on the panel warned advertisers not to pay ad-blocking companies for access to consumer eyeballs.

“The consumer holds the power. [Ad-blocking companies] should not be able to get involved and hold the power, especially when the default is ‘all advertising is bad.’ That’s the default…. But ultimately, the [entities] that control the browser-level experience and publishers with good technology can find a way to create a better product and still serve good ads,"" said Hartman.

“Data -- whether it’s formalized data collection, case studies, or lab data that we’re commissioning – all of those different data factors are things that we’re looking at how to integrate to really give clear guidance about what levers to pull in terms of designing creative and delivering ads and website design," said Riordan-Butterworth.

“Ad blocking continues to grow, there are 200 million people on the desktop using it -- and our data shows that 80% of ad blockers heard about ad blocking from a friend or family member. So it will continue to grow in terms of usage, but overtime, on select sites, users will start to see “ad light” experiences, better experiences, and I think there will be more testing by publishers putting up roadblocks and requests to turn off blocking," said Hirshfield

During the summit’s cocktail after-party, Horizon's Williams added that marketers, advertisers, ad tech companies, and brands across the digital advertising ecosystem need to put forth an effort to better manage expectations.

“At the moment, no one can appease everyone in the game,” said Williams. “Users want little or no advertising, but publishers can’t and won’t forego a big chunk of their revenue -- especially smaller ones with no paying subscribers. Millennials appear to refuse to pay for their news (and various other types of media) meaning advertising isn’t going anywhere."

There’s no simple solution. "The rise of ad blocking has put the spotlight on both native advertising and more interactive, relevant ads as a solution to cluttered, disruptive advertising that frustrates consumers,” said Williams. “As in-app usage eclipses mobile web surfing, integrated advertising and brand experiences in apps also presents itself as a strategic option."

Still, he says an important consideration every business and agency needs to make is their holistic strategy to combat ad blocking. "If one publisher is thinking about that in an empty room, their only realistic course of action is a defensive one.”

More than 200 people-- including employees, clients, and partners-- attended the invitation-only event.