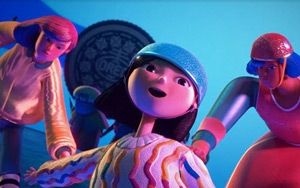 Oreo is launching a campaign spanning more than 50 markets around the world.

Called "Open Up with Oreo," this latest extension of the brand's "Wonderfilled" marketing platform focuses on inspiring fans of all ages to be more open to those around them, make new, sometimes unexpected connections, and discover what they have in common.

The campaign is kicking off with an animated TV spot from The Martin Agency that conveys the "open up" concept by using the motif of twisting open an Oreo cookie.

The spot—backed by a danceable, upbeat tune sung by multi-platinum-selling recording artist Adam Lambert—shows a young girl at a roller rink inspiring people around her to connect with one another. Many of the animated characters have far-out hairdos and outfits, meant to convey, in Oreo's words, a "playfully diverse" group. The ad has 30-second and 15-second versions.

The campaign "conveys an optimistic and hopeful message that we think will resonate with all our fans," said Jennifer Hull, brand director global Oreo at Mondelez International, adding that the concept of opening up is one that "appeals to liberating the child inside and celebrating a feeling of wonder, no matter the location or language.”

The spot is launching first in the United States. It debuted on "The Bachelor" on Jan. 18.

It will next roll out in Europe and Eastern Europe, Middle East and Africa, followed by Southeast Asia in February and the other global markets during the first half. Vocals, lyrics and languages will be adapted locally as necessary. In total, there are 10 different language versions. The spot will continue to run in all of the markets throughout 2016.

The campaign will also include a digital content series, set to launch on Feb. 2, consisting of animated stories that demonstrate how sharing an Oreo cookie "can open an unexpected introduction, even a friendship, between two characters from different walks of life," according to the brand.

While each market handles its own media plan, they will all leverage the Mondelez International brand's Twitter, Facebook, Tumblr and YouTube assets, and in-store point-of-sale promotions. Some markets will use additional digital content, physical events, or custom product embossments.

In addition, some markets will host sweepstakes that will result in the awarding in Fall 2016 of a prize of one trip to New York City for winners from around the world.

Oreo declined to specify its media budget for "Open Up," but described it as being on par with that of other global campaigns that it has run in the last two years, such as "Play With Oreo" and its partnership with the latest Transformers movie.

Also this week, in the U.S., Oreo is debuting a mysterious "Oreo Wonder Vault" concept—what it's calling an "epicenter of cookie exploration from which Oreo treats are released year-round."

The first Oreo flavors to be released through the Wonder Vault will be red velvet (which received a strong response in limited-time release last year) and cinnamon bun. Both are being added to the brand's permanent U.S. product lineup.

Oreo reports that it will also announce the release of a third (limited-edition) flavor next month.

Additional agencies working on the campaign include 360i and Weber Shandwick.