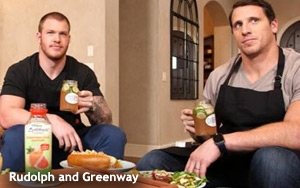 The brands are co-marketing home-delivered "Big Game in a Box" meal kits featuring recipes and fresh ingredients "inspired by the players' favorite tailgate grub," in their description.

The kits, which serve eight, come in two versions: Rudolph’s Bratwurst Sandwiches and Greenway’s 4-Hour Pulled Pork Tacos. In addition to the main dishes, they include two side dishes: Buffalo wings with Bolthouse Farms Chunky Blue Cheese Yogurt Dressing, and an arugula salad with Bolthouse Farms Classic Balsamic Vinaigrette. The kit also includes a recipe and the fixings for a Bolthouse Farms Watermelon-Mint Lemonade mocktail.

The kits can be pre-ordered for $119 at Chefd.com/partybox for shipment in time for the big game. Rudolph and Greenway will donate a portion of their meal kit proceeds to designated charities.

To promote the boxes, the players were filmed in a "cook off" video, which is being featured on Chefd.com and both brands' social media channels. The players are also promoting the boxes on their personal social channels.

Fans are being encouraged to watch the video and vote for their favorite of the two main-dish recipes, to earn an entry for a sweepstakes with prizes that include a football tailgate package for the 2016/17 regular season game of their choice, autographed player memorabilia or Chef’d gift cards.

Each box order will also automatically enter the purchaser for a chance to win.

For Chef'd, the promotion is part of a larger collaboration with the NFL Players Association with the goals of developing a long-term strategic licensing partnership that would feature various "players turned foodies" creating their own meal kits.