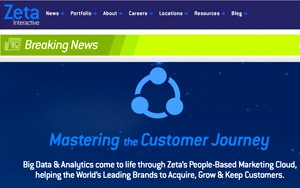 Zeta Interactive for the first time joins the Gartner Magic Quadrant for Digital Marketing Hubs as a niche player alongside Nielsen, Sizmek, Marin Software, and Teradata.

Meeting brands and their agency partners at the intersection of Big Data and advanced analytics, Zeta closed out 2015 generating more than $200 million in revenue, and Steve Gerber, Zeta COO, estimates the company will reach $300 million in revenue this year.

Zeta was recognized by Gartner for its support, ability to partner well, and the return on value of clients, per Gerber.

They must cover key areas and capabilities such as the ability to profile audiences; combine first-, second- and third-party data sources; provide workflow and collaboration tools and multichannel marketing activities and automation; and unified measurement and optimization.

Data has become Zeta's defining attribute. The company, co-founded by David Steinberg and former Apple CEO John Sculley in 2007, plans to face the zillions of devices that will come on board during the era defined by the Internet of Things head on because it can support and process multiple data touchpoints across devices like smartphones as well as refrigerators and home security systems. It will have the ability to pull in information from search queries, process the data and spit it back out. "We think it's exciting that a home security system can message the homeowner," Gerber says.

Data scientists at the company developed algorithms that run in real-time and can change as consumer behavior changes. The technology, which Gerber refers to as "scoring as a service," runs across "very large datasets."

Zeta has built some of the technology, but also acquired strategic pieces. The company funded its part of the eBay Enterprise deal in November 2015, acquiring the CRM division, with the $125 million raised in July from the Blackstone Group. The company, originally founded as XL Marketing until its name change in January -- had been focused mainly on email marketing and analytics that support customer lifecycle management.