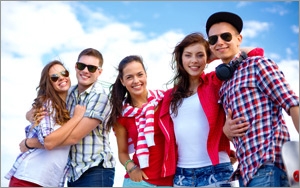 Millennials are ready for the group home. It’s time to move on. Let’s talk Gen Z. This is, after all, the first year that people born around the turn of the century start tooling around in cars, for better or worse. Might be a good time to mull the mobility sentiments of people who are about to become a money sink, at least those planning for college.

The good news is that, based on Gen Z word-of-mouth data, the family discussion about how to handle that $40,000 tuition fee might not also include an addendum on who pays for the new car, because the next generation seems tepid at best about owning one -- especially in contrast with how their parents and grandparents pined for their own set of wheels.

Among teens 13 and older, word of mouth has actually increased for everything but cars, which, as a percentage of daily talk, is way down. Consumer research firm Keller Fay Group, using 2009-15 data from its TalkTrack system, and global marketing firm Morpace, gauged consumer conversations, finding that teens ages 13-17 were the only age segment to see a decline -- 27% -- in the number of people who are talking about cars daily. By contrast, among people 18-29, car buzz is up 23% to 27% of the cohort, and up 17% among people 30-39 years of age, and 10% among consumers 40 to 49.

It’s a big step down for Gen Z, which had owned the biggest percentage of car buzz, at 30% but, at 22%, is now below that of 30-39 year olds, and at about the same buzz level as people in their 40’s. Most striking is that in every other category, Gen Z daily conversation is up. Sixty-three percent of Gen Z talks about media and entertainment -- an 18% increase -- while 51% of them talk technology, for a 20% increase; and 45% talk beverages, for a 9% increase.

Domestic car brands should take note and begin speaking to Gen Z right about now. The Keller Fay data suggests that American car brands have suffered the largest declines in word of mouth among the demographic, on average, with the biggest drops for Ford and Chrysler. General Motors, acknowledging the hate-to-own trend, has been busy investing in the car-sharing and app-based car service businesses. The car brands that are seeing an increase in talk among Gen Z are Subaru, Audi, and Hyundai.