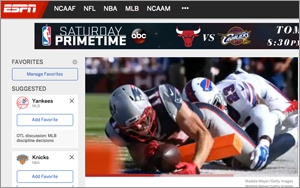 MoffettNathanson Research says total average viewership of live sports events from 2009 to 2015 has been relatively unchanged -- down just 0.4% to 523,000 average viewers.

But non-sports programming, including its mother-ship show, “SportsCenter,” has dropped 5.4% in that six-year time period. Viewing for this programming dropped 12.2% in fiscal year 2015 to 245,000 average viewers from the previous year.

“We believe this speaks to the secular shift in consumer behavior, as the Web increasingly delivers more video-rich information, including sports,” wrote media analyst Michael Nathanson.

ESPN total live programming and production costs were $7.2 billion in 2015 -- a climb of 111% from the previous year. MoffettNathanson expects this live sports fees to continue to rise, but at lower single-digit percent increases going to $9.4 billion annually in 2020.

Far and away, ESPN’s biggest live sports annual programming cost is NFL “Monday Night Football” franchise, estimated to be $1.69 billion in 2015 and rising to $2.01 billion by 2020.