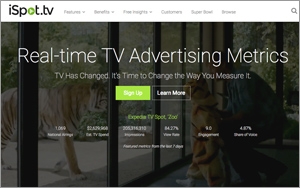 The company -- which has tracked the activity of TV ads in real-time, offering media revenue estimates among other data -- is now adding new metrics. That includes impressions and non-duplicated reach for all ads across live national/local TV, time-shifted platforms, video-on-demand and over-the-top digital TV platforms.

Accessing 10 million connected TV screens, the company says it measures “every Zip code at scale, all cable and satellite operators, as well as an even representation of household demographics and TV consumption between OTT and non-OTT viewing.”

It will also take into account channel switching, fast-forwarding and other behaviors.

For example, during the fourth quarter, 73% of automotive ads were viewed from 75% of the ad to its completion. During this period, there was an 18% “view” rate in viewing a commercial to its “midway” point.

iSpot.tv uses proprietary technology embedded into TV sets that can detect show content and commercials in iSpot.tv’s commercial catalog. Using proprietary fingerprinting technologies, ads can be tracked on the TV set and can identify what is being viewed on each screen.

For its media revenue projections -- part of its existing research package -- iSpot.tv has used data from SQAD to obtain spending estimates. SQAD provides iSpot.tv with average advertising insertion costs across all networks.

Recording linear broadcasts from 113 networks in multiple locations around the country, iSpot.tv tags over 40 different dimensions of metadata, including brand, agency, actors, products, songs, moods, URLs and other data.