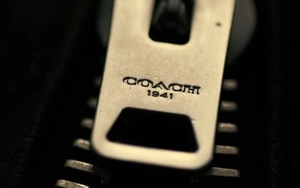 Sales reached $1.27 billion for the second fiscal quarter, up 4% from $1.22 billion reported in the same period last year, or a 7% gain in constant currency. (Stuart Weitzman sales for the period came in at $94 million.) And its gross profit climbed to $859 million, up from $841 million a year ago.

Sales for North American Coach brand fell 7%, however, to $731 million from $785 million, pressured by intense promotional activity, especially in its outlets. CEO Victor Luis says that represents a sequential improvement, and is proof that the storied accessories brand is on the right path in its turnaround efforts.

In a conference call webcasting the results, he says marketing was partially responsible for the improvement.

“We remain focused on creating desire for our brands and building emotional connections with consumers globally,” he says. “During the holiday season, we were decidedly more fun and festive in our marketing approach, using the lighthearted tagline, ‘Give Coach or else.’” He says the ads, which included a first-time-ever run on network TV, along with digital efforts in markets around the world, drove more than 135 million impressions. “And our popular pup campaign brought smiles to consumers’ faces.”

As the company enters its 75th year, he says the company will kick off its heritage campaign next month, which he described “a key vehicle to demonstrate our authenticity.”

He’s also bullish about the role of men’s fashion going forward. While men’s sales currently represent about 17% of its global sales, “we believe it represents a $1 billion opportunity.”

Deutsche Bank is also upbeat about the luxury brand’s performance, and calls the North American comparable sales “a relief. We believe the company’s work on product, marketing and store footprint is bearing fruit,” it says in a recent report. “We expect the work done on the modernization of the stores, the enhancement of the shopping experience and on the merchandise selection to drive an improvement in traffic and conversion in full price retail.”

But it is also a little cautious about expectations for European sales, “given commentary from other retailers and brands about some weakness stemming from the Paris terrorist attacks in November.”