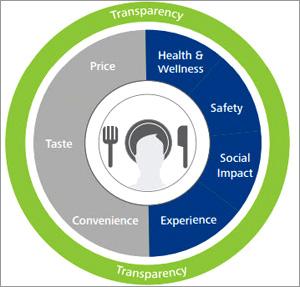 A new study underlines how widespread health and wellness and other "evolving value drivers" have become in influencing food and beverage sales in the U.S.

The year-long study from Deloitte, Food Marketing Institute and Grocery Manufacturers Association included a survey of 5,000 prescreened American adults, fielded to more than 11,000. Survey data were weighed to represent U.S. food purchasers, based on U.S. Census data (age, gender, household income). Food purchasers were defined as adults 18 to 80 who are primary food/beverage shoppers for their households and eat dinner at home at least three times per week.

Overall, 51% of those surveyed indicated that they weigh factors including health and wellness, safety, social impact, experience and transparency more heavily than the "traditional" value perception drivers of taste, price and convenience in their buying decisions. The other 49% said they give more weight to the traditional drivers.

The shift toward the evolving drivers was "pervasive across region, age and income," meaning that "each and every consumer targeted by food manufacturers and retailers has changed in a fundamental way," stress the researchers.

"It's not just Millennials or the most affluent putting these evolving drivers in the mix," summed up Jack Ringquist, principal, Deloitte Consulting LLP and global consumer products leader. Further, "preferences are becoming even more fragmented than the food industry may have anticipated," he said.

The survey also found a shift in how Americans define food safety. Nearly three-quarters (74%) said that a definition limited to foods or beverages not causing any "immediate, physical, harm" is insufficient. Instead, their definitions now include factors such as "free from harmful ingredients" (62%), clear and accurate labeling (51%), and "fewer ingredients, processing and nothing artificial" (42%).

Consumers who place more value on the evolving drivers appear to be more likely to use social media, mobile apps and digital sources to research products and brands on the path to purchase. They're also more prone to distrust the food industry than those who put more stress on traditional drivers.
Within the 51%, the researchers defined three subgroups, based on the strength of their expressed preferences for the evolving versus traditional value drivers.

"Balanced health" buyers (27% of the total 51%) expressed a 77% preference overall for evolving drivers, with greatest stress on "nutritional content." A second group, "free from" buyers (15% of total), had an 83% preference for the evolving factors, with a strong emphasis on "free from harmful elements." The third group, "naturally oriented" buyers, had a 95% preference for evolving drivers, with particular stress on "organic, non-GMO, all-natural and antibiotic/hormone free."

In the past, nutritional content was often the sole consideration in buying decisions based on health and wellness, and consumers often focused on a single element such as protein, sugar or carbs, notes the study. Today, they take "a more holistic view, weighing more product attributes, qualitative product claims and longer-term health considerations."

Evolving drivers also were found to be influential across product categories. Based on percentages of consumers who indicated that they considered one or more evolving drivers in their buying decisions within a category, the categories most affected by those drivers are fresh/prepared meals (66%) and breakfast (60%), followed by frozen a la carte items (55%), frozen dinners (55%), baking (50%) and canned goods (50%).

But significant numbers—between 49% and 42%--also consider evolving drivers within eight other major categories, including non-alcoholic beverages (45%). Alcoholic beverages are the least-affected category, but even there, a third said that emerging factors are part of their buying decisions.

The report lays out how consumers define each of the five evolving drivers, and the key industry opportunity each represents.

It notes that health and wellness is the most important but also the most complex driver. Consumers' definitions vary widely and can include many attributes. Conclusion: Food and beverage manufacturers and food retailers need to "dissect the nuances" of preferences around health and wellness, and respond quickly.

Regarding food safety, companies need to ensure that they are satisfying consumers' broadened definition. Regarding "social impact" factors like food sourcing, sustainability, animal welfare, and fair treatment of employees, they are advised to "identify which issues have most opportunity or represent the greatest risk, and when to lead versus follow."

Consumers define the "experience" driver as including factors beyond the actual products offered, such as retail store layout and services, channel innovation, brand interaction, and personalized engagement spanning pre-, during and post-purchase. Conclusion: "Manufacturers must authentically engage with consumers, both directly and in partnership with retailers."

The survey found "transparency" to be an "overarching" evolving driver. Consumers define it as including clear labeling, certification by trusted third parties, and company attributes such as access and trust. Food companies and retailers should provide access to all relevant information, and "be prepared for two-way engagement to promote trust," sums up the report.

For the study, the researchers also interviewed more than 40 executives from leading food and beverage manufacturers and retailers, distributors and other industry experts, and analyzed secondary research.

The full report, "Capitalizing on the Shifting Consumer Food Value Equation," can be downloaded at no charge on Deloitte's site.