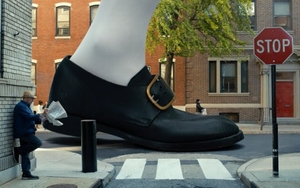 Visit Philadelphia is preparing to launch an over-the-top tourism commercial, its first TV since 2011.

With the tagline “There's more to a legendary city than its legends,” the spot honors the city's legends while also showing there are more elements that deserve attention.

"Philazillas" features a larger-than-life Ben Franklin and a giant cheesesteak vying for attention among the city's other enjoyments  — restaurants, museums and beautiful public spaces. The commercial is aimed at leisure visitors, the fastest-growing segment of Philadelphia visitors.

The spot, created by Red Tettemer O’Connell and Partners, also will run online through media distribution partners such as Lin Digital, TubeMogul, Facebook and YouTube. (Feb. 1-April 3 and June 13-Sept. 25.)

Research commissioned by Visit Philadelphia in 2015 found that while most leisure travelers acknowledged Philadelphia’s iconic sites, they seek fun and authentic experiences, restaurants, nightlife, art and walkability for urban destination getaways. That’s why “Philazillas” shows off the many city features that compel travelers to visit.

“The challenge in developing a spot that broadens people’s perspectives about what makes Philly great was having a bit of fun with the two things the city is most famous for — cheesesteaks and history,” said Steve Red, president and chief creative officer, Red Tettemer O’Connell + Partners. “But at the same time, it was important to acknowledge their legendary status and importance to the city.”

Philadelphia has hit records and milestones in recent years, with 39.7 million total visitors in 2014 and 77% occupancy at Center City hotels and an historic visit from Pope Francis in 2015.

The effort seeks to keep this momentum going and for Philadelphia to stay top of mind for people making decisions about their next vacation or even contemplating a new location for their home or business.