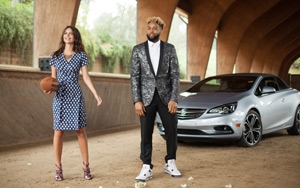 This is a very big year for GM’s Buick division, but it will not be “back” in the Super Bowl for the 50th anniversary game. Rather, it will be Buick’s first-ever participation in the big game.

The automaker will run advertising supporting something else that’s new: Buick’s first convertible in a quarter century, the new Cascada. The campaign extends the “Experience the New Buick” campaign, launched in 2014, an effort that has won several industry honors. The campaign takes a different, humorous turn on perception changing: instead of trying to create a perception that didn’t really exist, the campaign makes fun of the perceptual problem that does exist with people surprised to discover that the cool vehicle they are admiring is…“A Buick?”

The automaker says it will be the first of a raft of new Buick commercials this year as it rolls out three new products, including the redesigned LaCrosse sedan and a new compact crossover, the Envision, both of which go on sale this summer, with the Cascada in dealerships in coming weeks.

The most-liked Super Bowl ads of the last five years have not been heavily represented by cars. According to Ace Metrix, which came up with the list, Budweiser dominates, with six of the top ads, with the 2014 heartstring ad “Puppy Love” having the highest score with the “Brotherhood” and “Lost Dog” ads close behind. PepsiCo’s Doritos is next with five of the most likeable ads of the last five years, thanks to its “Crash the Super Bowl” crowdsourced video contest.

Although cars are the big spenders, only Toyota, with its Muppets ad with Terry Crews, Mercedes-Benz with its tortoise and hare ad for the AMG GT, and, of course, Volkswagen’s Darth Vader “The Force” ad, are in the top 25.