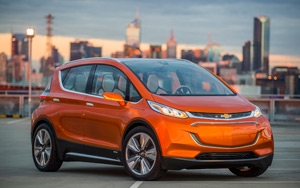 Chevrolet will use digital to tout electrical when later this year, the GM division brings to market its all-electric 2017 Bolt EV. The car has gotten strong notices since it was unveiled at CES in January, and was one of the buzz generators for the show. That is partly because the vehicle is a unique small crossover with a powertrain offering a 200-mile range between full charges, and a window sticker starting at around $30,000.

Darin Gesse -- product manager for Chevrolet’s electrified cars, who spoke to Marketing Daily at the Washington, D.C. auto show last week -- says production starts at the end of 2016, with vehicles rolling into dealer showrooms at Christmas or after the New Year, for all 50 states.

He says dealers will be required to put in level 2 (240 volt) charge stations -- and as was the case with the gasoline/electric Volt, salespeople will have to get a lot of marketing training on the car, which is completely unique to the brand, not an electrified extension to a current model.

While there will be national marketing, Gesse says the coastal regions will be focus areas. “California is going to have big demand but also the Northeast.” The Atlanta area has been one of the fastest-growing markets for electric cars and hybrids, but the state has eliminated its incentive, so Chevrolet isn’t going to be as much a focus area as it would have been, say, two years ago, when it was a strategic sales locus for products like Nissan Leaf.

“We are going to target markets we feel will be where we find a customer that is not only concerned about the environment but also engaged and thrilled with the technology.” He says the car will bring a younger buyer as well, and the media strategy will weigh toward the digital world in which the prospective buyer of an all-electric crossover spends most of his or her time.

He says digital also offers better targeting opportunities. “It offers tools that let us know their interests, where they are spending time, and their shopping patterns.” Chevrolet, which is also relying on mobile channels for the car, unveiled it at CES in January via a Facebook Live broadcast, the first automaker to use that approach. “That has been huge for us,” he says. “We got ten times as many views as we were expecting, and that shows us where the future of marketing will be, so we are taking a hard look at it.”