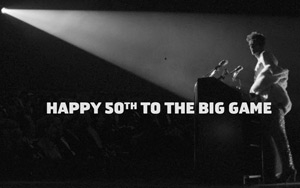 Snickers will parody Marilyn Monroe's famous, risqué"Happy Birthday, Mr. President" performance in its 30-second Super Bowl 50 ad — or so it appears based on a teaser video released by the candy brand.

The black-and-white video shows a tall person in an evening dress and fur stole singing "Happy Birthday, Mr. Super Bowl" in an extremely deep, gruff voice, but the individual's face is obscured in shadow.

The ad, from BBDO New York, is the latest in the brand's global “You’re Not You When You’re Hungry” campaign.

“Since we’re kicking off the ‘50’ celebration of one of the world’s most iconic events it seemed only fitting to cast Marilyn Monroe, a Hollywood icon with global appeal, to help us celebrate,” said Allison Miazga-Bedrick, director of the Snickers brand. "As always, the ad will feature a funny surprise that we’re confident will satisfy fans hungry for a laugh,” she said.

Monroe, literally sewed into a skintight, nude-colored gown, sang "Happy Birthday" to President John F. Kennedy for his 44th birthday at an event in New York's Madison Square Garden in May 1962. It was her last major public appearance before her death three months later.