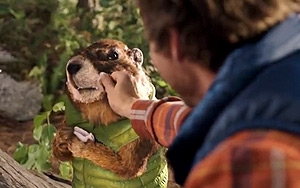 Everyone knows Dalmatians and Clydesdales are Super Bowl shoo-ins, but this year, a marmot is hoping to get some love, too. In its first Super Bowl ad, the niche outdoor gear company is hoping its squirrel-ish mascot will win over a whole new audience.

It isn’t just that the marmot is cute, whether he’s eating a S’more or peeing off a cliff, says the Rohnert Park, Calif.-based company. If all goes as planned, he will extend the brand’s reach beyond hard-core mountaineers to leisurely park-bench sitters.

“With this Super Bowl ad, we’re inviting people to 'fall in love with the outside,’"says Mark Martin, its president, in a press release. “ We believe that nature and outdoor activities are a vital part of a life well led, and our marmot is here to share that message with America.”

The company says the new campaign, from Goodby, Silverstein & Partners, represents a shift away from athletes performing “incredible outdoor feats to showcasing the simple joys and benefits of just being outside.”

It comes at a time when more Americans are heading outdoors, albeit in not-very-athletic fashion: The Outdoor Foundation says 143 million Americans at least occasionally go outside for recreation. And the NPD Group reports that sports retailers sold $2.7 billion in outerwear in the last 12 months.

While it’s hard to say whether the investment—30-second spots cost $5 million on this year’s game — will pay off, it may set the company apart from such category stalwarts as Patagonia, REI, the North Face, LL Bean and Columbia Sportswear. (All that astonishing GoPro-esque snowboard footage starts to look the same.)

But in targeting the casual outdoor tribe, it faces even bigger competition, from Nike and other athletic generalists: The most popular outdoor activity is outdoor running, including trail running, with about 20% of Americans (ages six and older) saying they lace up at least occasionally.

The campaign fits with Marmot’s quirky roots. Founded by college buddies who lived to hike, it caught its first big break back in 1974, making 108 very puffy jackets for “The Eiger Sanction,” a Clint Eastwood film. Marmot is owned by the Florida-based Jarden Corp., which owns 120 brands, including Sunbeam, Oster, Mr. Coffee, and Yankee Candle.