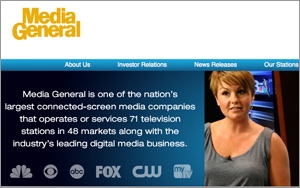 A long, protracted affair to control Media General TV stations is finally over -- with Nexstar Broadcasting Group winning out over Meredith Corp. in a $4.6 billion cash and-stock-deal.

Meredith and Media General originally announced a deal for $2.4 billion back in September. Nexstar immediately rushed in complaining the deal was undervalued for Media General shareholders.

For its efforts, Meredith will get a $60 million break-up fee -- as well as a first look at certain TV stations and digital businesses owned by Media General that are to be spun off.

The new Nexstar Media Group is projected to have $2.3 billion in annual revenue from its broadcast and digital media businesses -- more than doubling Nexstar’s current annual revenue and cash flow.