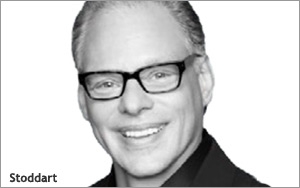 Arthur Sandoun, the Publicis Groupe executive who was put in charge of the holding company’s major creative agencies earlier this month as CEO of the newly created Publicis Communications, is quickly putting his stamp on the organization.

Sadoun has promoted Rich Stoddart to CEO Leo Burnett Worldwide, effective Feb. 1. Stoddart, 52, has most recently been running the agency’s North America operations as CEO and will retain that post while taking on his new role.

Stoddart replaces Tom Bernardin, 62, currently chairman and CEO, and who will remain chairman through June 2017. Stoddart will report to Sadoun.

“Leo Burnett is a leading force within Publicis Communications,” stated Sadoun. “We want to make sure that this brand and its unique culture are stronger than ever as we pursue our ultimate goal -- to be the indispensable creative partner to our clients. [Publicis Groupe CEO] Maurice Lévy and I are both confident that Rich is the best person to incarnate Leo Burnett on this new journey and lead the teams to great successes for our clients and our agencies.”

Bernardin joined Leo Burnett Worldwide as CEO in 2004 and the following year hired Stoddart back to the agency to run Leo Burnett Chicago. Stoddart was named President, North America in 2005 and was promoted to NA CEO last year.

Stoddart will remain based in Chicago, the global headquarters of Leo Burnett.

Publicis Groupe unveiled a major corporate restructuring last month toward the end of what executives acknowledged was a disappointing year for the holding company and a year that included the loss of several big pieces of business from clients including Proctor & Gamble, Coca-Cola and L’Oreal.

Organic growth for the first nine months of 2015 was a tepid 1% percent, including 0.7% growth for the third quarter.  Further details on the reorganization were disclosed earlier this month.

In addition to putting Sadoun in charge of its big creative agencies, the Groupe consolidated its media agency operations under Steve King, CEO of ZenithOptimedia, who was named CEO Publicis Media.

That shift was cited by Wall Street analyst Brian Wieser of Pivotal Research as among the reasons he upgraded Publicis Groupe stock to a “buy” rating earlier this week.