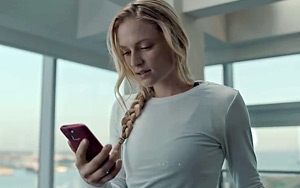 Under Armour gets to thumb its nose at skeptics, posting its first billion-dollar quarter ever, with especially strong sales in women’s apparel and high-end footwear.

And its CEO says the gains -- which mark the 25th consecutive quarter of revenue jumps of more than 20% -- are evidence that its product mix, emphasis on women, and investment in digital are paying off.

Shares of the Baltimore-based apparel company have been beaten up in recent months, partly because of speculation that its “I Will What I Want” marketing campaign wasn’t winning women over to the brand fast enough. But the quarterly results demonstrate that “our core business remains incredibly strong,” says Kevin Plank, chairman and CEO, in a conference call that was webcast.

Plank says it's worth noting that sales in footwear, which accounts for 17% of sales of its premium offerings — those over $100 — were especially strong. He says it plans to double the number of running shoes priced over $100, so there will now be eight models. And he points with pride to the Cam Newton C1N football cleat, priced at $120, on its way to becoming the No. 1 cleat in the country, just as Newton is set to lead the Carolina Panthers to the Super Bowl. And he’s particularly bullish on the SpeedForm Gemini 2 RE, its smart running shoe, and SpeedForm Slingshot, made with a 3D knitting process that is meant to deliver a superior fit and feel.

But Plank saved his strongest words for outlining the company’s prospects among women. “We had another quarter of double-digit growth, and we can do better. We built this business on personality, with women like Misty Copeland and Gisele  Bündchen, but [the female customer] has very high expectations for us, and our product has to meet that expectation. She likes us, and wants to have a relationship with us.”

He says women’s apparel is its best-selling and fastest-growing category in e-commerce, outperforming both men and youth, adding: “We think it can be as big a business as men’s, if not bigger.”