Millennials Most Apt To Second-Screen 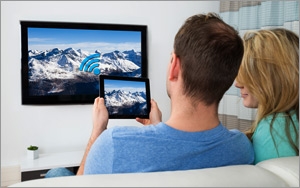 Marketers are going to have to work harder to capture Millennials’ attention when it comes to video entertainment.

According to new research from the  Consumer Technology Association (formerly the Consumer Electronics Association), more than three-quarters of Millennials engage in second-screen behaviors when it comes to video content. Millennials are also much more likely to engage in these behaviors than adults who are 35 and older, according to the CTA.

“They like to optimize the opportunity to use their devices,” Janvier Depeazer, research analyst at the CTA, tells Marketing Daily. “They like the interactivity and engagement capabilities of them.”

The television remains the preferred device for viewing video content, largely because of its larger screen-size and picture quality. But smaller-screen devices (including computers, tablets and smartphones) are preferred collectively for watching streamed content over traditional TVs (57% vs. 44%). For most content, Millennials are more likely to watch from non-traditional devices than adults 35 and over, according to the CTA.

Although only about 11% of consumers have canceled service from a traditional television provider (cable, satellite, fiber-optic) in the past year, about a fifth of all consumers (21%) reported not having a subscription from a provider for more than a year. Although traditional providers remain the most-used resources for accessing or consuming content, 46% of consumers report receiving content through a paid streaming services, a 7% increase from 2014.

“More than ever before, consumers -- especially Millennials -- are using non-traditional devices such as computers, tablets and smartphones for content viewing,” said Steve Koenig, senior director of market research, CTA, in a statement. “As technology continues to improve, consumer behaviors and expectations also evolve -- but televisions still reign as the preferred viewing device in American households today.”