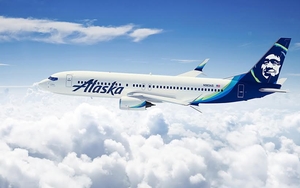 Global branding and design firm Hornall Anderson created the new image for the Seattle-based airline with the goal of raising its national visibility.

For more than 80 years, the airline’s point of difference has been combining outstanding performance with genuine, caring customer service which has resulted in a fiercely loyal following.

However, rapid growth, continual improvement, and a ruthless focus on their customer’s experience was leaving their brand expression behind, according to the company.

Hornall Anderson worked collaboratively with the airline to understand and define what makes the airline successful, creating a brand strategy that resonates emotionally with both employees and customers—while also adding focus and direction for decision-making going forward.

“Our goal was to proudly show the rest of the world what Alaska passengers have known for a long time: Alaska Airlines is dedicated to understanding flyers, and to giving them the best experience possible,” said Euan Fraser, strategy director for Hornall Anderson.

The refreshed visual and verbal expression aims to respect the heritage and personality of the airline while injecting more warmth, energy and confidence into the brand. The elements of the system allow the brand to show up consistently, but with enough flexibility to be organic, approachable, and bold when necessary.

“The smiling Eskimo proudly looks ahead, welcoming passengers with warmth, wisdom, and care. His energetic aura reflects Alaska’s positive outlook and passion for brightening people’s journeys. And the bold new wordmark confidently signs off everything they do with the trusted Alaska name,” explains David Bates, creative director for Hornall Anderson.

The redesign includes the airplane livery and cabin interiors, inflight collateral and food and beverage packaging, airport signage, website and mobile app, updates to the uniforms, and a short film to investigate the meaning behind the face on the tail of their planes.

Hornall Anderson will continue to help the airline extend the brand, says Sangita Woerner, VP of marketing at Alaska Airlines.

“More importantly, they’ll be our strategic thought partner—ensuring that we’re translating our new brand identity in the most impactful way possible,” Woerner adds.