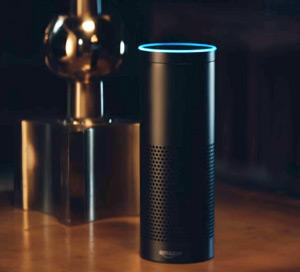 Alexa, the Amazon personal assistant, makes her debut in Echo's first Super Bowl advertisement on Feb. 7, when the Carolina Panthers face off with the Denver Broncos in Santa Clara, California.

Alongside Alexa, the teaser ad features Alec Baldwin and Hall of Fame Dolphins quarterback Dan Marino. The two show off Echo's and Alexa's capabilities at home.

Aside from streaming music from Amazon Prime Music and services like Pandora, Echo can manage shopping lists and answer questions.

Baldwin asks "Alexa, what's a snack stadium?" after Marino suggests that he have a "snack stadium" at his Super Bowl party, to which Alexa answers: "A stadium built entirely of snacks."

Echo responds to voice commands, questions and searches. The hands-free device connects to Alexa, a cloud-based voice service, to provide information, play music, read the news, check sports scores or the weather, among other things.

More than half the content that fans view prior to the Super Bowl centers on playoff contenders, recipes, party ideas, official team content, and sponsored pre-game contests and half-time previews, according to ZEFR, a video ID technology company that claims to have more data on YouTube than any other company outside of Google.

Some liken Amazon's move to Apple's when it tapped Samuel L. Jackson and Zooey Deschanel to explain the value of Siri. Jackson asked Siri to cancel appointments on his calendar to find a nearby store to buy organic mushrooms, but he didn't ask for a definition. That's where Amazon shows off something a little different.