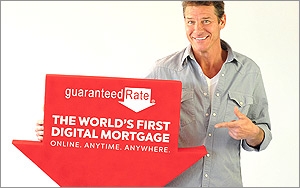 Guaranteed Rate wasn’t planning to run a Super Bowl-related commercial initially, but when the Chicago-based online lender learned that there were still a few available placements in local markets around the country, it jumped at the chance.

The company’s ad will air in Chicago, Boston, Tampa and Salt Lake City, based on its "overall business coverage and growth as compared to the available commercial inventory remaining."

Developed with agency Modus Direct and its own in-house creative team, the 30-second spot will focus on the top three reasons to choose Guaranteed Rate for a home loan -- namely its low rates, Digital Mortgage and rank as a top 10 national lender.

"The messaging is clear and direct to effectively communicate what sets us apart from other mortgage lenders," the company stated.

The spot also features Home Improvement celebrity Ty Pennington, who has been the brand's spokesperson since November 2013 and has appeared in several of Guaranteed Rate’s commercials. He has helped the brand increase awareness and generate new business, according to the company.

This collaboration with Modus Direct is somewhat unique; the company is a heavy direct-response advertiser working with a direct response agency. Yet, it is running a spot in a venue that is more well known for brand-heavy advertisements.

"We do not believe that branding and direct response are mutually exclusive. We have been successful in accomplishing both in our marketing efforts so far, and we are confident that this Super Bowl exposure will do the same," says Darren Beck, CMO at Guaranteed Rate.