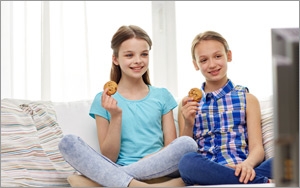 National commercial TV ratings slightly narrowed their losses in the fourth quarter of 2015 versus earlier in the year, with kids TV commercial ratings showing a surprising uptick.

Bernstein Research says average commercial ratings plus three days of time shifting (C3) sank 6% during the period was better than the 8% decline in the third quarter.

Kids TV viewing climbed 2% in the period, although the increase was not uniform across all cable kids channels, with three of Nickelodeon’s networks witnessed a 15% gain the fourth quarter. Non-Nick kids networks sank 15% during the period.

Why the overall rise for kids TV?

Todd Juenger of Bernstein Research says: “Kids tend not to fast-forward commercials (at least not as much as adults do), so the increase in time-shifted viewing results in a larger increase in C3 for kids than for adults." (C3 only counts commercial audiences, and only if they do not fast-forward the ads.).