Barbie's Bombshell: What The Skinny Blonde Has In Common With James Bond 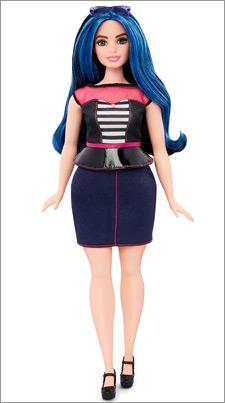 All of Toyland is abuzz with big news from Barbie: Mattel says it is expanding its Fashionistas line with three new body types — tall, petite and (cue sighs of “What-took-them-so-long” from feminists everywhere) curvy. And it’s adding many new skin tones, eye colors and types of hair to the line, as well as introducing (cue horrified shrieks from fashion fiends) a flat foot.

The toy marketer is launching the line with #TheDollEvolves, a big social media splash, including a video explaining the new look. And while it would be easy to write the move off as too little, too late — the 56-year-old blue-eyed blonde has been watching her sales decline for the last four years — toy experts say that’s a little too simplistic.

For one thing, Barbie is first and foremost a fashion doll, explains Jim Silver, CEO/ editor in chief at TTPM, a leading product review site for toys. She’s designed to be one size, so that all the clothes and shoes Mattel make fit her, and to make it easy for kids to change her clothes and shoes. (The doll’s primary audience is girls between 3 and 7.) “Retooling production for many new sizes is a massive undertaking,” he tells Marketing Daily.

But he says there has long been a deeper, more philosophical argument within the El Segundo, Calif.-based toy company about the Barbie-ness of the woman herself. “Is she a character in her own right, like a character from a movie? There have been many Batmans, for example, but they have always been Bruce Wayne, and always been Caucasian. There are people who think James Bond has to be played by an English actor. Others argue that Idris Elba, a black Englishman, would make a great Bond.”

Those arguments aside, he expects little girls will love the new dolls. “We live in a world where people can choose their own avatars and emojis, and it seems strange to walk down the Barbie aisle, with something like 24 feet of white dolls with blue eyes. That’s just not the way people look. Beauty comes in all shapes and sizes. No one wants to eat at a restaurant with just one thing on the menu.”

And there will now be a Barbie banquet: All told, the new line — available online soon and in stores in March — includes 33 dolls, with four body types, seven skin tones, 22 eye colors, and 24 hairstyles, with plenty of clothes and accessories for all.

While Mattel is due to announce its annual results next week, in its most recent quarterly report, it said Barbie sales fell 4%. She’s been losing ground to dolls with more personality and less baggage. Elsa, from “Frozen,” has been a huge hit, as have Mattel’s Monster High dolls, “which are racially ambiguous,” Silver says. (Barbie’s declines are even more notable given the overall strength of the toy business, which NPD Group says gained 6.7% last year to $19.4 billion.)

Mattel, meanwhile, is “literally changing the face of the brand,” says Evelyn Mazzocco, SVP and global general manager of Barbie, in the company’s release. “Barbie has always given girls choices –- from her 180 careers, to inspirational roles, to her countless fashions and accessories. These new dolls are more reflective of the world girls see around them –- the variety in body type, skin tones and style allows girls to find a doll that speaks to them.”

1 comment about "Barbie's Bombshell: What The Skinny Blonde Has In Common With James Bond".
Check to receive email when comments are posted.
Next story loading