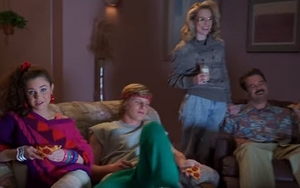 ed Baron frozen pizza is marking its 40th anniversary with a 40-week-long campaign fondly saluting how family pizza night has endured through all kinds of cultural changes and fads.

The “Timeless” campaign, from the Space150 agency, includes a 30-second TV spot showing a young girl and her family enjoying Red Baron at home in 1976 (the brand’s launch year), and again in the ’80s, when she’s a teenager (shown above). Then the scene shifts to a modern kitchen setting, where the same woman, now a mother, is sharing a Red Baron with her husband and kids.

While the clothing styles have changed, parents are still telling “cheesy” jokes, and families are still having a good time over a hot pizza. The voiceover at the end: “Come together over the timeless pizza, Red Baron.”

Content will include images showing the changes in its logo and packaging over the years, trivia, and social engagement activities around fans’ own memories of pizza nights.

The campaign will also feature a dedicated Web site where fans can experience the past 40 years of history, including Red Baron’s role, by spinning a virtual oven dial.