How Google Wearable Displays Will Move Search Into The Next Phase 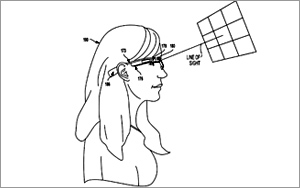 It may seem simple, but having the ability for a wearable head display mounted device to detect whether someone is wearing the gadget without an on-off switch or to perform a function based on a signal will help move the search for information into the next phase of queries. A Google patent application explains how.

Google has submitted a patent request to the U.S. Patent & Trademark office describing a method that detects a signal from a wearable computing device and causing it to perform a function based on the signal. The method may also include generating a representation of the detected signal, comparing the representation of the signal to a threshold value, and causing the wearable computing device to perform a function based on a specific value.

Computing devices will move away from personal and laptop computers and tablets and cellular phones to much smaller, wearable devices that provide information with a touch, shake of the wrist or a mobile command.

Google's patent application describes what technology inventors call "near-eye displays," a graphic display close to a wearer's eye that displays an image as a normal-sized image, such as might be displayed on a traditional image display device.

The wearable computing devices with near-eye display may also be referred to as "head-mountable display." It places a graphic display or displays close to one or both eyes of a wearer.

"To generate the images on a display, a computer processing system may be used," per the patent application. The displays may occupy a wearer's entire view or a part of the field of view. Head-mounted displays may vary in size, taking a smaller form such as a glasses-style display or a larger form such as a helmet.

This patent includes the ability of applications to interact in real-time with an augmented or virtual reality, providing examples for use in safety and aviation, as well as interactive gaming. The device would have the ability to detect whether or not the computing device is being worn, which could make strides in medical applications.

In fact, it's clear in a new patent landscape report from iRunway that wearable technology from companies like Jawbone, Fitbit, Google, Garmin and others is making significant strides in non-invasive monitoring.