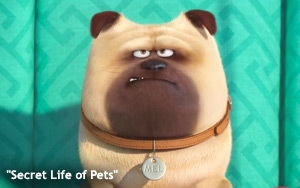 It’s safe to assume that a good number of people heading out to see Universal Pictures’ upcoming animated film, “The Secret Life of Pets,” will also be pet owners, or at least have an affinity toward pets.

Playing into that natural overlap, PetSmart and Universal have inked a deal that makes the retailer the exclusive carrier of film- and character-branded pet products.

“Last year we got a sneak peek at the film and were inspired to team up with Universal Pictures on the launch of this perfectly aligned pet-oriented movie that is sure to be a smash hit,” a PetSmart representative tells Marketing Daily. “It’s a fun story line that we believe will be popular among our pet parents and their families -- kids and adults alike.”

The arrangement includes a “multichannel shopping experience” timed to the early July release of the movie that will include a “store takeover” presence at the company’s more than 1,400 stores in North America, as well as custom-animated television, print and digital advertising and social engagement programs. Among the items to be offered will be pet apparel, slogan t-shirts featuring movie characters, branded pet-toys, treats and beds and a list of the characters’ “Top Picks” of products sold within the stores.

“Our exclusive partnership with PetSmart is a critical component of our strategy to engage more directly with consumers whose pets are an enormous part of their families,” said Jamie Stevens, executive vice president of global retail development for NBCUniversal Brand Development Group, in a statement. “We are excited to collaborate with PetSmart to expand our reach and bring The Secret Life of Pets to life.”