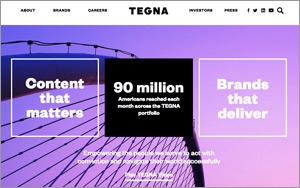 As with many TV station groups, Tegna Inc. witnessed declining political spending in its most recent financial results versus the year -- which had a negative effect on overall company revenues.

The McLean, Va.-based TV group, formerly known as Gannett Co., witnessed a 7% improvement in core local and national advertising to $296.3 million for its media segment -- its TV stations.

It expects first-quarter revenues to climb 10% to 12% from political advertising, retrans fees, and digital revenue.